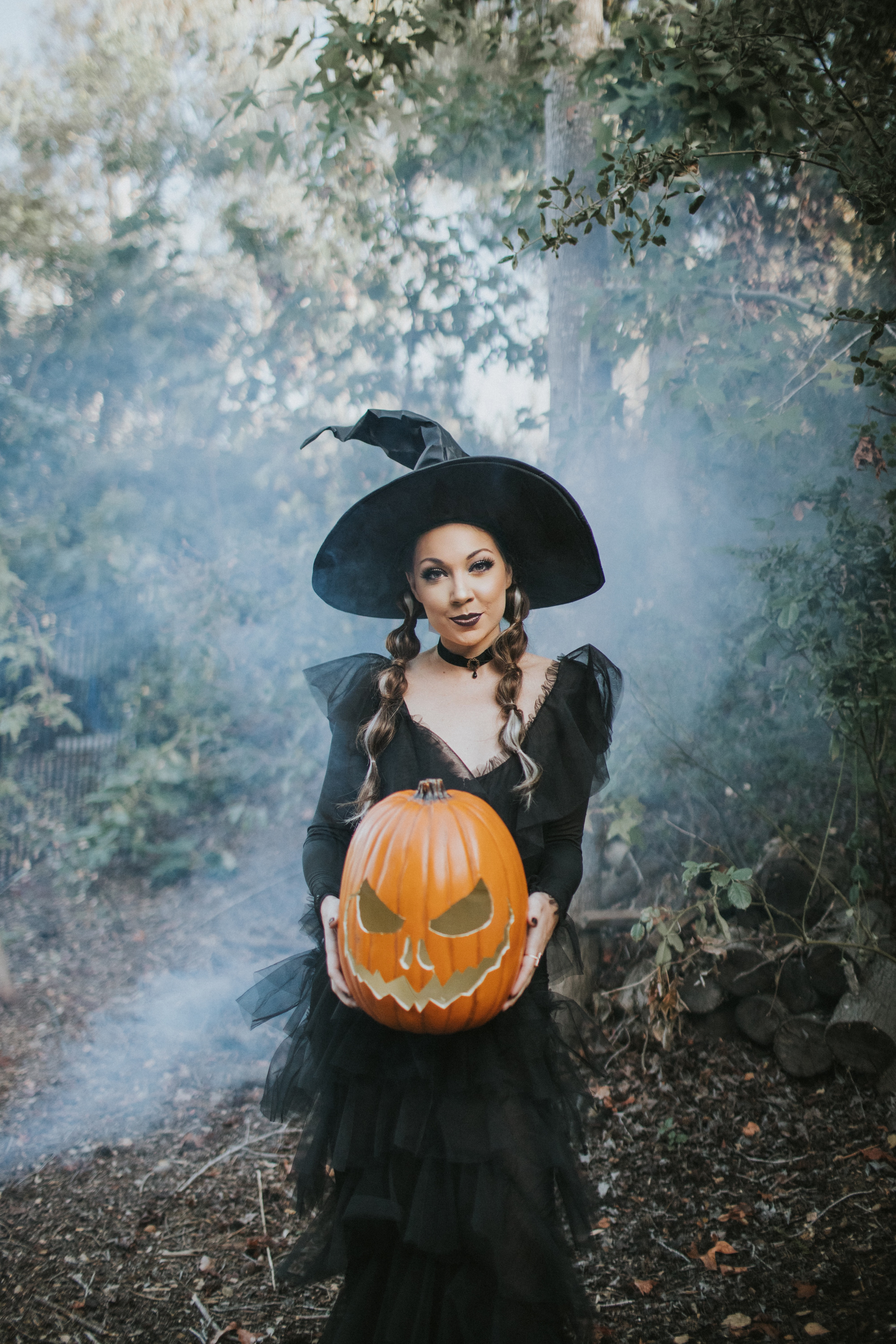 Don’t be a basic witch with your Halloween costume photos this year. Conjure photos that will make heads spin! Check out the look I created below thanks to a few easy tricks:

No costume is complete without a fantastical amount of gorgeous locks. My favorite is Cashmere Hair extensions. They have every shade imaginable and then some, including spunky colors like hot pink to play up any Halloween costume. I used my 20″ Bombshell Brunette extensions for this costume and then added a few ghostly pale pieces of hair to make it extra spooky.

The bubble pigtails made the costume feel more edgy rather than cutesy, which I love! The look would not have been nearly as dramatic if I didn’t have these extensions in for some extra sizzzzle. 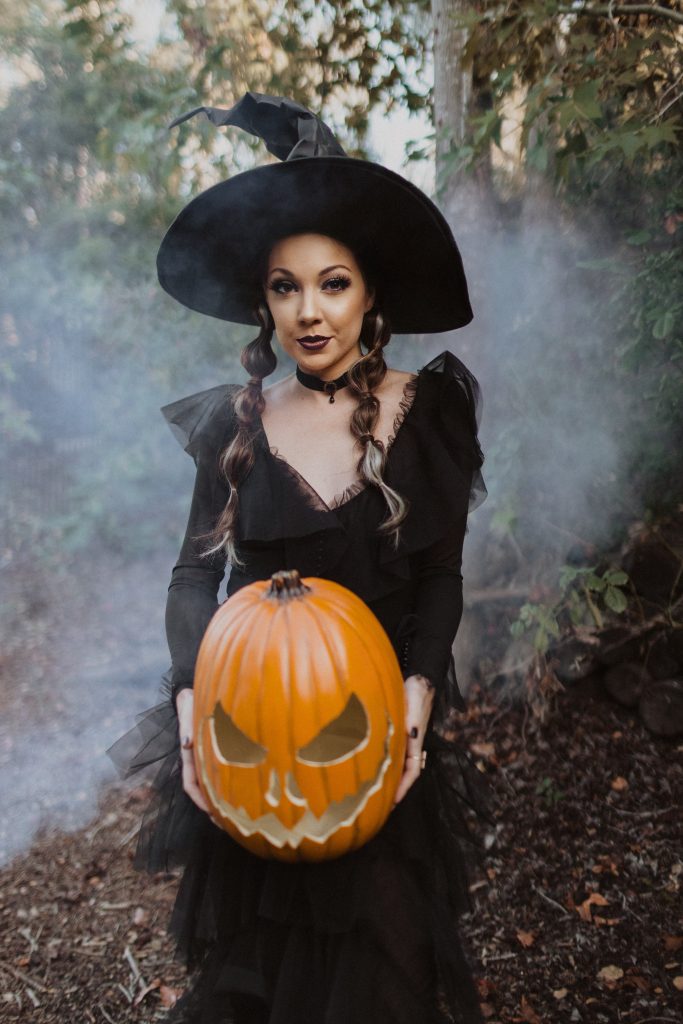 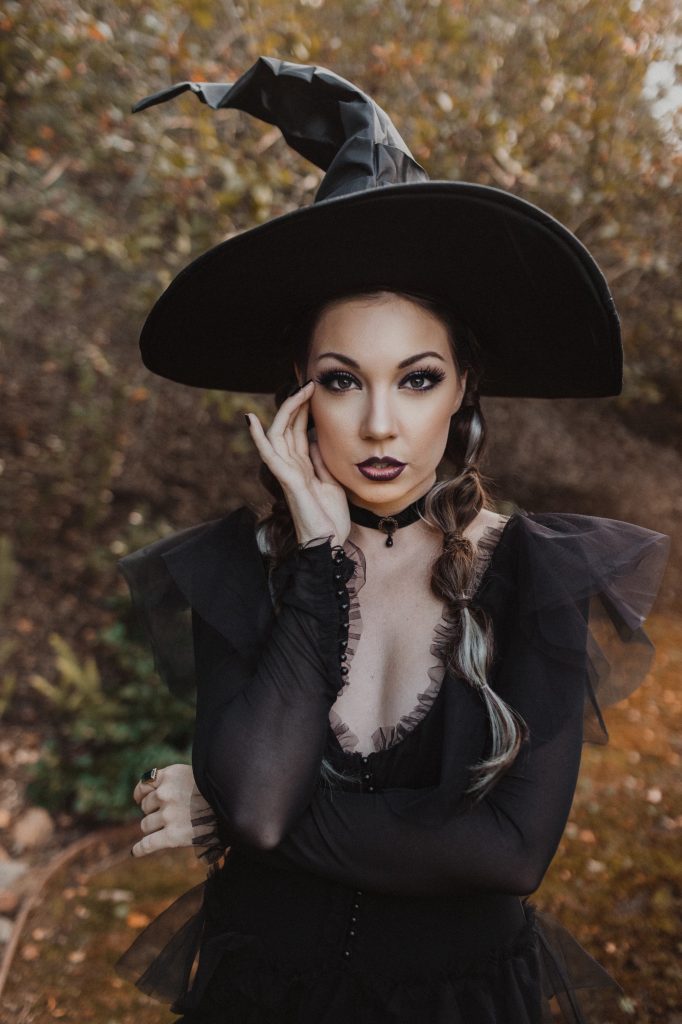 My grandmother’s emerald ring and a black tear drop choker helped add dimension to this look. I also opted for black nails and black lipstick to play up the gothic vibes. It’s not your run-of-the-mill witch costume, which was important to me. I wanted it to stand out among the other witch costumes this season (not your basic witch, you know?) 😉 Think about ways you can make your costume unique to you! You’ll feel spooktaculer knowing the little details that went into making it YOUR costume. 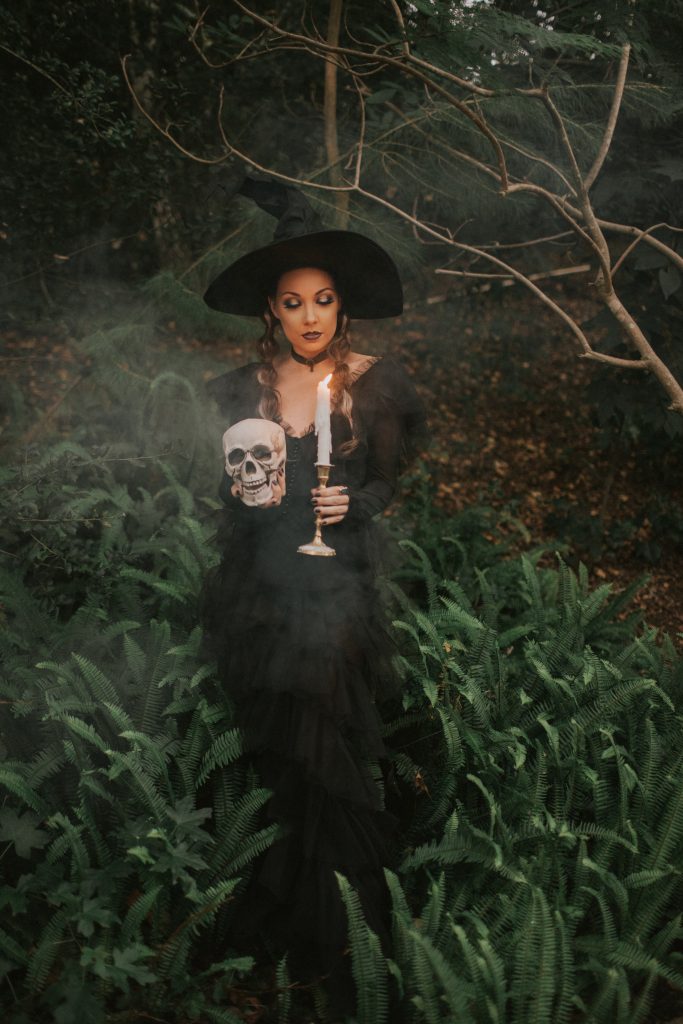 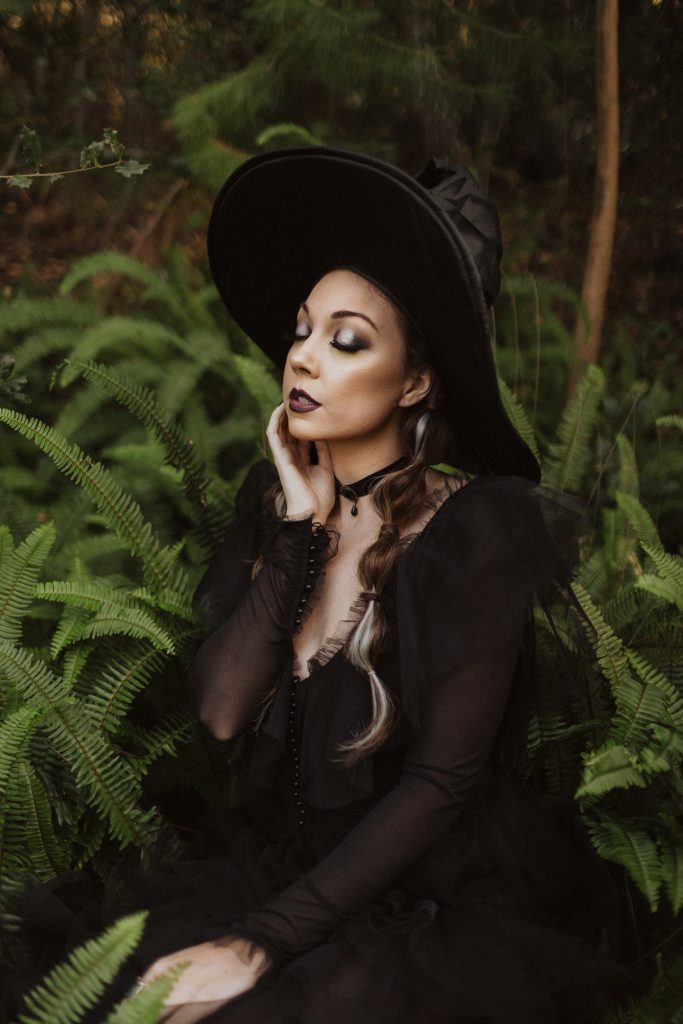 A way to make your costume more realistic (and fun!) is to incorporate props that your character would actually carry/use. The implementation of the skull head and candlestick allowed for a bit of a storyline in the photo. Where am I going? Why do I need a skull head? Am I about to conjure a spell in the woods (hex and ex anyone?). A story makes a photo more powerful. It evokes emotion in the viewer.

Give it a try with your costume this year!

Fog adds such a cool element to any photo and made these witch photos extra eery! But how did we get the perfect fog on a completely fog-less night out in a dark, enchanted forest?

These photos give the illusion of being taken deep within the woods, but in fact they are less than 10ft from the side of my friend’s house, where we plugged in her fog machine and artfully directed clouds of spectacular mist into the frame of each photo. You can get your own at most Halloween stores! Just don’t forget the fog juice (yes that’s a thing). 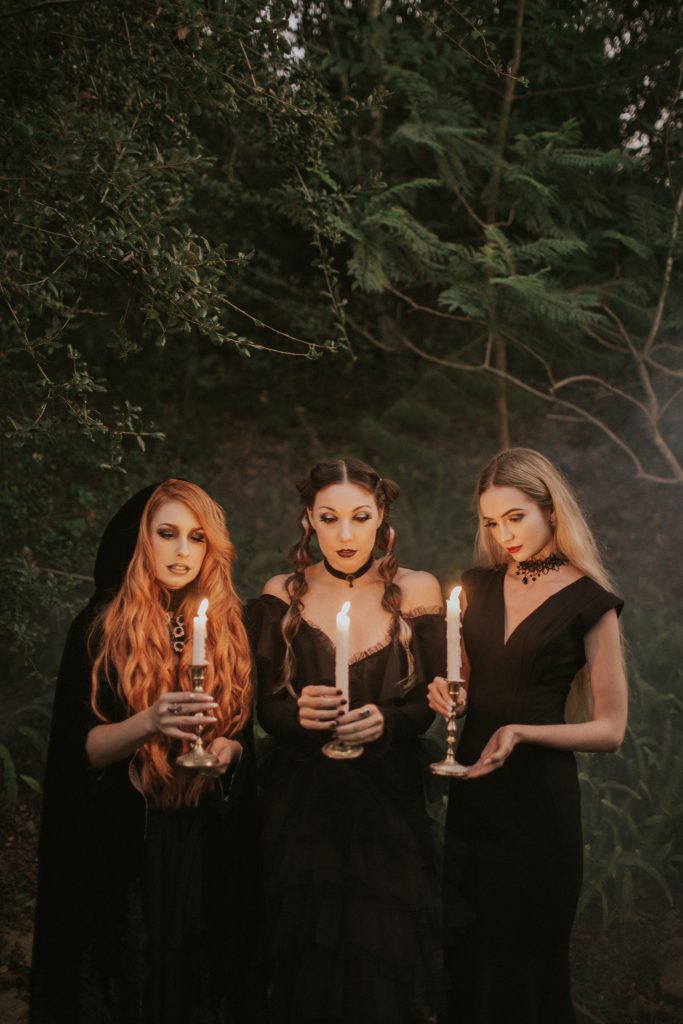 Trick Five: Get with your GHOULS!

There’s nothing like numbers to make a photo truly eye-catching. What’s cooler than one gothic witch on a moonlit night? How about three, each holding a candle flaming ominously? Photos are so much more fun when a group is involved! And they’re always a hit on social media. Something about the combined effort of a group costume just moves people! (also thank goodness I wore my hair extensions because LOOK at these witches’ hair!). 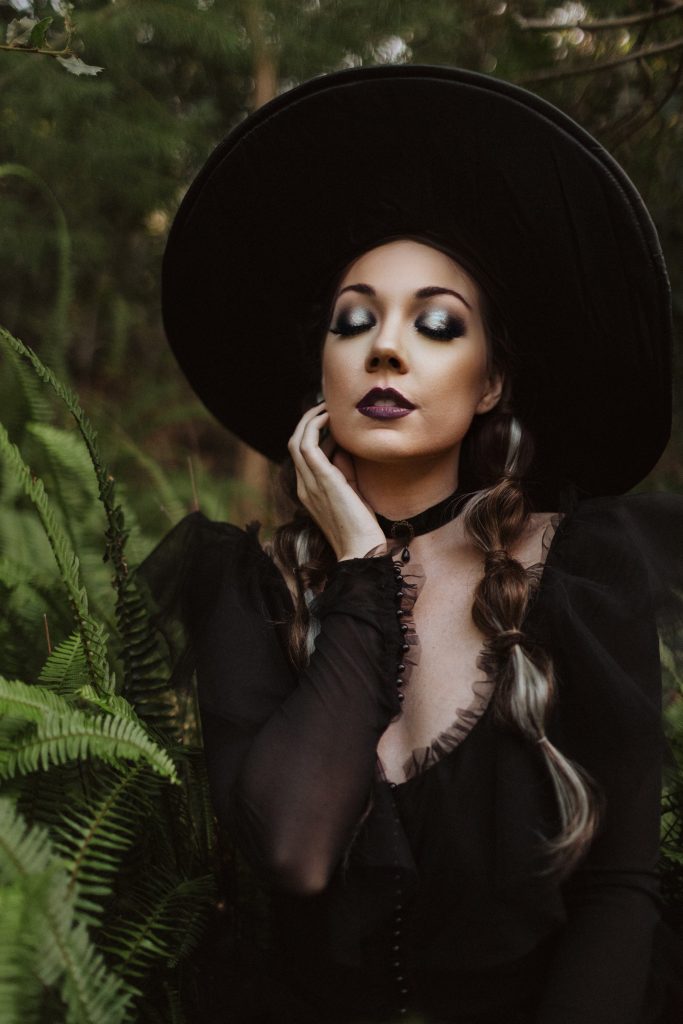 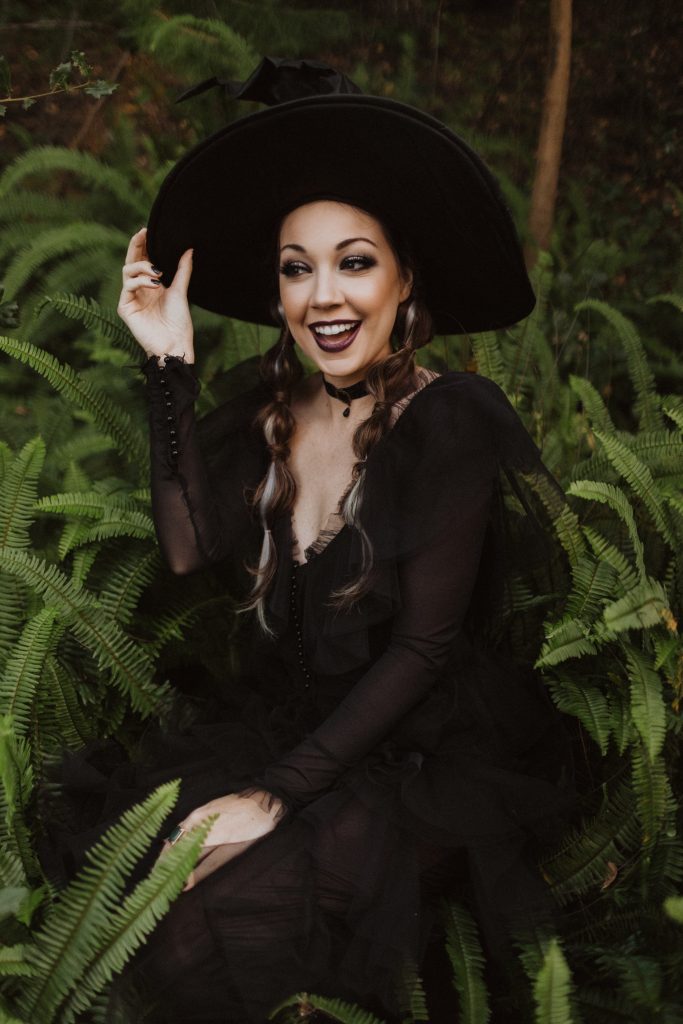 I hope my 5 witchy tricks encouraged you to take some spooky good photos this year! Peep the babes behind the making of this shoot:

Model One (from left to right): Sarah Ingle 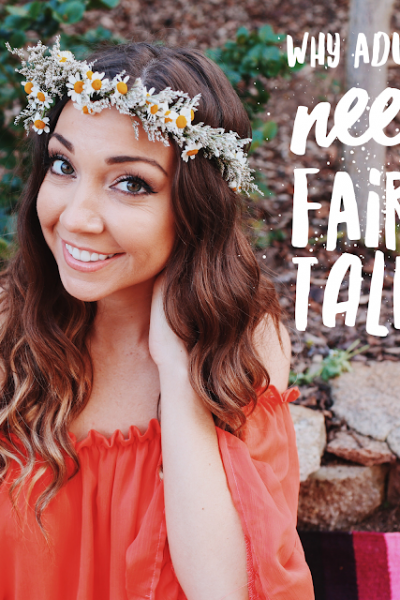 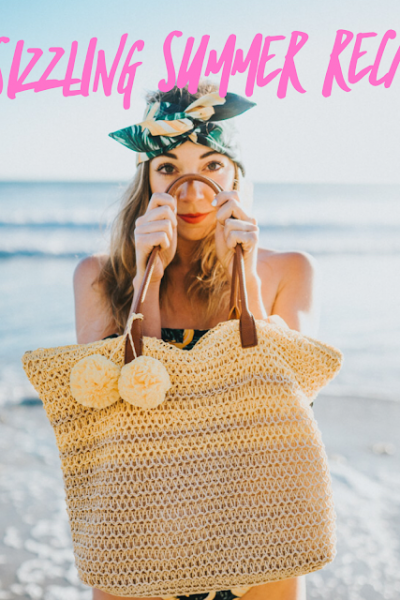 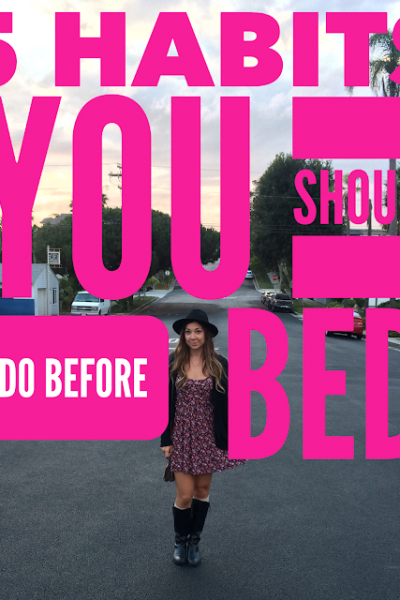 5 Habits You Should Do Before Bed